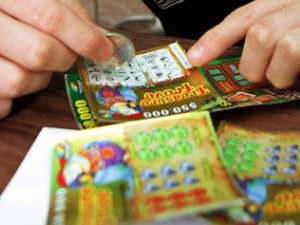 A scratch card is a small card sold for AU$1 or more that gives a chance to win prizes by scratching off an opaque covering to reveal them. Scratch cards, which are usually called scratchies in Australia, are quite popular in the country.

They are also available throughout the world and go by many other names, including scratchers, scratch-offs and scratch tickets. Scratchies are generally controlled by regional government, which means that if a card is purchased in one area of Australia, a winner could not cash it in elsewhere.

Scratchies vary in price, and prize levels are based on that ticket’s value. These are the very best Australian scratch card vendors.

NSW Lotteries is one of the top Australian scratch card vendors that caters to the residents of New South Wales. Its biggest card is the Prestige, which costs AU$15 and has a one million dollar top prize. Bling Bingo, which costs AU$4, pays out up to AU$200,000, and Goldfish, a scratchie that costs just AU$1.10, has a AU$20,000 top prize.

Golden Casket is a Queensland-based Australian scratch card vendor that is Tatts-owned and therefore sells many of the same scratch-its as NSW Lotteries. Two of its most popular cards, Rich Café and Ho Ho Ho!, cost just AU$2 each but can pay out a top prize of AU$25,000.

SA Lotteries, another one of the great Australian scratch card vendors features $pot $ome Ca$h, which is a dollar scratchie with a top prize of AU$20,000. It also features popular Crosswords-themed cards that cost either AU$3 or AU$5 and can pay out up to AU$100,000 or AU$300,000, respectively. The company’s top card is Fortune, which costs AU$10 and has a AU$300,000 top prize.

Intralot Australia is one of the most popular Australian scratch card vendors throughout Tasmania and Victoria. Its most prominent product is the Lucky Tix scratchie series, which has ticket prices ranging from AU$1 to AU$10. Prizes range from AU$1 to AU$500,000, and only the AU$10 Money Magic card pays out that top prize.

Lotterywest is the state-owned lottery of Western Australia. It sells a standard selection of Scratch’n’Win cards at AU$2, AU$3, AU$5 and AU$10, which have a top jackpot of AU$300,000. It recently added a AU$20 Scratch’n’Win, which is essentially two AU$10 games on a single card. 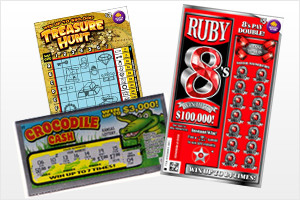 Crocodile Cash, which is sold by SA Lotteries, has been one of Australia’s top scratchies for a long time, and the object of the game is to match a prize value three times. The game has a low face value of just AU$1.10 but can pay out as much as AU$20,000 on a single ticket.

Ruby 8’s is a AU$5 Scratch’n’Win card and one of the top scratchies in Western Australia. The goal is to match winning numbers, and the Ruby 8 is a special token that can double the prize. The top standard prize is AU$100,000, but the card also has three bonus games.

Treasure Hunt by NSW Lotteries is a AU$4 scratch-it that can award up to four wins on each card and can hit the top prize of AU$50,000 twice. The card resembles a pirate’s treasure map, and the object is to reveal at least three of the same winning symbols.